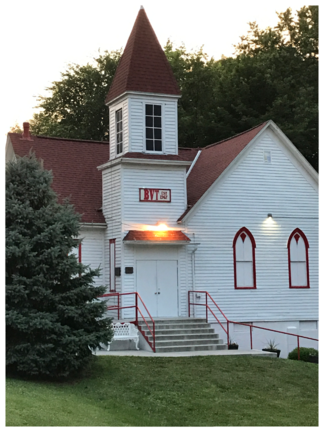 ​The Brownville Village Theatre is one of the oldest repertory theatres in the state of Nebraska.  BVT’s success is due to its summer repertory season employing 12-15 young theatre artists from all over the Midwest.  The theatre’s home is over a century old and was formerly the Brownville Christian Church.  Annually, the theatre brings over 3,000 audience members locally and throughout the Midwest to Brownville.  BVT has been expanding operations to create opportunities for our audience and local theatre artists by holding year round performances, workshops and events.

Mission Statement
To provide quality theatre in historic Brownville, Nebraska and nearby communities while giving opportunities to young theatre artists both locally and nationally to entertain, educate, and enrich the lives of our audience.

Where is Brownville Village Theatre?
The Brownville Village Theatre is located in the southern part of Nebraska right on the border of Nebraska, Missouri and Iowa. Brownville, Nebraska is the oldest town in the state. The theatre was created out of an old church and has a very intimate, yet creative climate.  Audiences come from all four states and other surrounding areas to see productions. Get your tickets today!

Brownville Summer Company Members
The Brownville Village Theatre Summer Company is composed of theatre and music students from colleges and universities throughout the United States. Each company member performs in a minimum of three productions and is assigned specific technical duties for the season.  It is a true repertory theatre experience.

True Rep Theatre
Make no mistake, BVT does shows in true rep fashion every summer! During the day you may be watching one show and by evening the set is taken down and another put up for a different show.  BVT company members never tire of their roles because they get a variety of them! If they're not on stage, they're helping back stage or out in the house. We instill in our company members the importance of teamwork and that becoming a well-rounded thespian increases their chances of longevity in the professional theatre industry. BVT company members succeed with camaraderie, versatility and professionalism.

BVT Board of Directors & Ambassadors
The Brownville Village Theatre operates under the direction of a volunteer Board of Directors, who are responsible for setting the budget, raising the money to meet it, and overseeing the care of the property. Members of the board also provide support for the BVT staff and company in many ways, and they deserve our thanks for their commitment and dedication in helping to produce a successful season each summer. The BVT Board of Directors was formally organized in 1970.